So I’ve updated my blog theme. It’s been an incremental change since I began fiddling with the CSS a month ago. The biggest change, however, is turning commenting off.

For reference, a stock install of this theme looks like this: 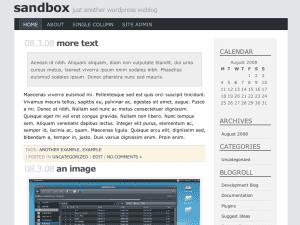 The only real functional change I’ve made is to remove commenting. Turning off comments became chic in the tech blogger world when Matt Gemmell switched comments on his blog off late November. I did it because I’m tired of dealing with automatically approving comments and a growing amount of comment spam.

But it got me thinking.

I was discussing with my wife how, though Matt Gemmell only recently disabled comments, my friend and fellow tech blogger Jason Brennan has never had comments enabled in the first place. I insinuated to her that Jason was just lazy, since he wrote his own blogging platform, and she replied with “well, yeah, you wouldn’t either, would you?”

And she’s right. If comments were disabled by default, I probably wouldn’t have enabled them. If I was writing my own Rails blogger platform and I had to spend hours writing and maintaining code for comments, I definitely wouldn’t have done it.

She pointed out how this is the “default” mode for the web, and she’s right again. The web is for serving documents, after all. It takes a fair bit of work to get comments working, compared to just serving documents. I feel like many blogs have comments enabled just because, like I did.

I’m hoping, like my new CSS, that this change will bring a new look to this blog.