So I’m in Australia to give my talk at Playgrounds Conference about asynchronous programming. While we wait for the video to be edited and uploaded, I thought I could take you through the talk in blog post form. So let’s dive in!

Today we’re going to be talking about asynchronous programming: what it is, why it’s important, and what it can look like in Swift. The topic is quite complicated and I don’t have enough time to go into a tonne of detail, but my goal isn’t depth, it’s breadth. I want to expose you to lots of ideas and give you hints about where to follow up to do your own research.

Most of the code Swift developers write is “normal”, or synchronous. Let’s take a look at an example.

This is an example of a synchronous, or “normal” Swift function call. It is synchronous, meaning from the call site’s perspective, it gets executed atomically. It starts, it finishes, all in one line of code.

If all the function is doing is adding two numbers you’ve already loaded from RAM, it’ll be really fast. If it has to retrieve those from RAM first, it’ll be orders of magnitude slower. If you’re doing something complex like reading a file from disk, then it’ll be orders of magnitude slower still. At a certain point, you’re wasting CPU time waiting for file I/O, network I/O, or other long-running task to complete.

That’s where asynchronous programming comes in: it mitigates this wasted CPU time by letting programs do stuff while waiting for other code to get executed.

Asynchronous programming is where you write code that’s executed out of order. Your program continues to execute new lines of code while it waits for previous lines to finish. Then, code gets executed in response to external signals like completed network requests, user interaction, all kinds of things! Code might get executed in parallel, too. Things get complicated quickly!

Like most mainstream languages, Swift is really all about writing synchronous programming, and forces programmers to choose the appropriate abstractions. Which to choose?

Software development is all about tradeoffs. Which abstraction you pick depend on which tradeoffs you want to make. Some languages and frameworks have strong opinions about how to do asynchronous programming, like Node.js. They use something called “non-blocking” functions because they have the benefit of never blocking the main thread. This is critical in JavaScript because there is only one thread, so blocking at any point blocks your whole app. Yikes!

Non-blocking code is great but has its tradeoffs: imagine if almost every function call you made in Swift had a completion closure instead of a return value. That might be terrible, but it might be great! Let’s press on and explore.

The first example blocks while the second example is non-blocking. The blocking call is simpler to understand, since it happens atomically from the call site’s perspective. But it’s less performant. The non-blocking call is better for performance but it doesn’t have an “immediate” return value, so it’s asynchronous nature propagates up the call stack. In effect, the code using it becomes non-blocking. This is annoying for developers, but you get really performant code.

Swift doesn’t have that same kind of opinionated nature as Node.js, which is a shame because it leads to developers avoiding thinking about abstractions.

Let’s look at the abstractions built-in to Swift.

Swift’s built-in abstractions are a bit lacking because it’s fairly unopinionated about asynchronous programming. Most of its asynchronous abstractions come directly from Objective-C, and aren’t that great. Let’s explore.

(We’re going to limit ourselves to iOS, macOS, watchOS, and tvOS – none of that “Swift on Linux” stuff.)

Grand Central Dispatch (GCD) is most helpful for managing threading, which is beyond the scope of this post. It’s probably not best to use GCD directly, but rather use it to build higher-level abstractions that are easier to think about. However, GCD is super powerful.

NSOperationQueues are built on top of GCD and allow you to “link” different operations together to form a complex dependency graph. They’re really cool! But kind of a pain to use directly. Check out DRBOperationTree for an example of an even more powerful abstraction built on top of operation queues.

It’s possible to use POSIX threads in Swift but it’s far too low level, I really discourage this approach.

Target/action is a pattern that calls a specific function on a specific object. It is used throughout UIKit, usually for user interaction like button presses or gesture recognizers. This pattern works okay for small uses but doesn’t always scale well.

Callbacks are built from closures, short anonymous functions that get executed later on in time. You’ve probably used these before at the completion of a network request or animation, but let’s take a closer look.

Here we have a logIn(with:) function that takes a completion handler as its last parameter, and that handler gets executed when the login succeeds or fails.

This “triangle of doom” is the code creeping further and further from the left side of the screen (right side for RTL languages). This is bad enough, but things get worse when you consider handling errors appropriately.

So now we have error handling strewn throughout our callbacks. Gross! Consider that none of these asynchronous functions work well with the built-in Swift error handling of throws. What a shame.

An important consideration when you’re writing a function that takes a call back is the callback’s signature. What information are you going to pass to it? We generally want to pass either a value (in the success case) or something else (in the failure case). A simple approach is to use an Optional.

We could just add an optional Error parameter, and in some ways that would be an improvement. The Error can be used to take appropriate follow-up action after an error is encountered.

An even better approach is to use a Result type.

A result represents either a success or an error. Because Swift is so keen on staying unopinionated, it doesn’t have a result type built in. You can either use the Result library or make one yourself.

If you’re going to use callbacks to write asynchronous code in Swift, I highly encourage you to use a Result type as a parameter to the callback. Not only is it clean, but it’s also a gateway to using higher-level abstractions. Something something monad.

Callbacks are useful for one-off async methods. You don’t need a fancy async approach if all you’re doing is, say, fetching some photos from the user’s library. But if you find yourself nesting callbacks within each other, look for a better solution.

Some Async Abstractions are Supported in Swift

As developers, we aren’t constrained to only using what our language and frameworks supply. We can use open source libraries and build our own abstractions that are better suited for our needs. There a tonne of abstractions out there to use, let’s take a look at a few popular ones.

(Promises and futures are technical distinct but I’m not going into the differences between them. We’ll use them interchangeably here.)

We can see that there are a few big improvements over simple callbacks. First, transforming one future into another is really easy using flatMap. Second, error handling is all done at the end in one spot. An error from any future is propagated through the chain, so you don’t end up writing duplicated error-handling code. Nice!

I couldn’t talk about asynchronous programming without discussing my favourite abstraction: functional reactive programming. Briefly, FRP encapsulates a stream of events that you can observe:

These streams, called observables, finish with either an error or completion event (never both), and they stop sending events afterwards. I’ve written a whole blog post about choosing an FRP library, but let’s explore some RxSwift examples.

That FRP code looks really similar to futures/promises. That’s because our code is structured such that it only sends one value and then it’s done. FRP has all the benefits of promises, and then some, and FRP is at its best when used for streams of values that get sent over a long period of time.

This is a better RxSwift example. We have a gesture recognizer that sends new value events ever time the user moves their finger on the screen. Then we map those events into locations, and bind those location events into a circle view’s center position. In five lines of code, we’ve written asynchronous gesture recognizer handling to have a view follow a user’s finger. Cool!

I should mention that RxSwift works well with idiomatic error-throwing in Swift, too. Even cooler.

FRP would be my recommendation for a fully-featured async approach. The abstractions are great and super-powerful, but do take some getting used to. If FRP is too complex for your needs, stick to using promises.

This is probably the most far-out approach we’ll discuss today. Actor-based programming treats “actors” as primitives for concurrent computation. Akka is a popular library for using actors in Scala, we use it at Artsy and it’s pretty cool.

This diagram is from Akka’s documentation, don’t look at it – it’s too complicated! 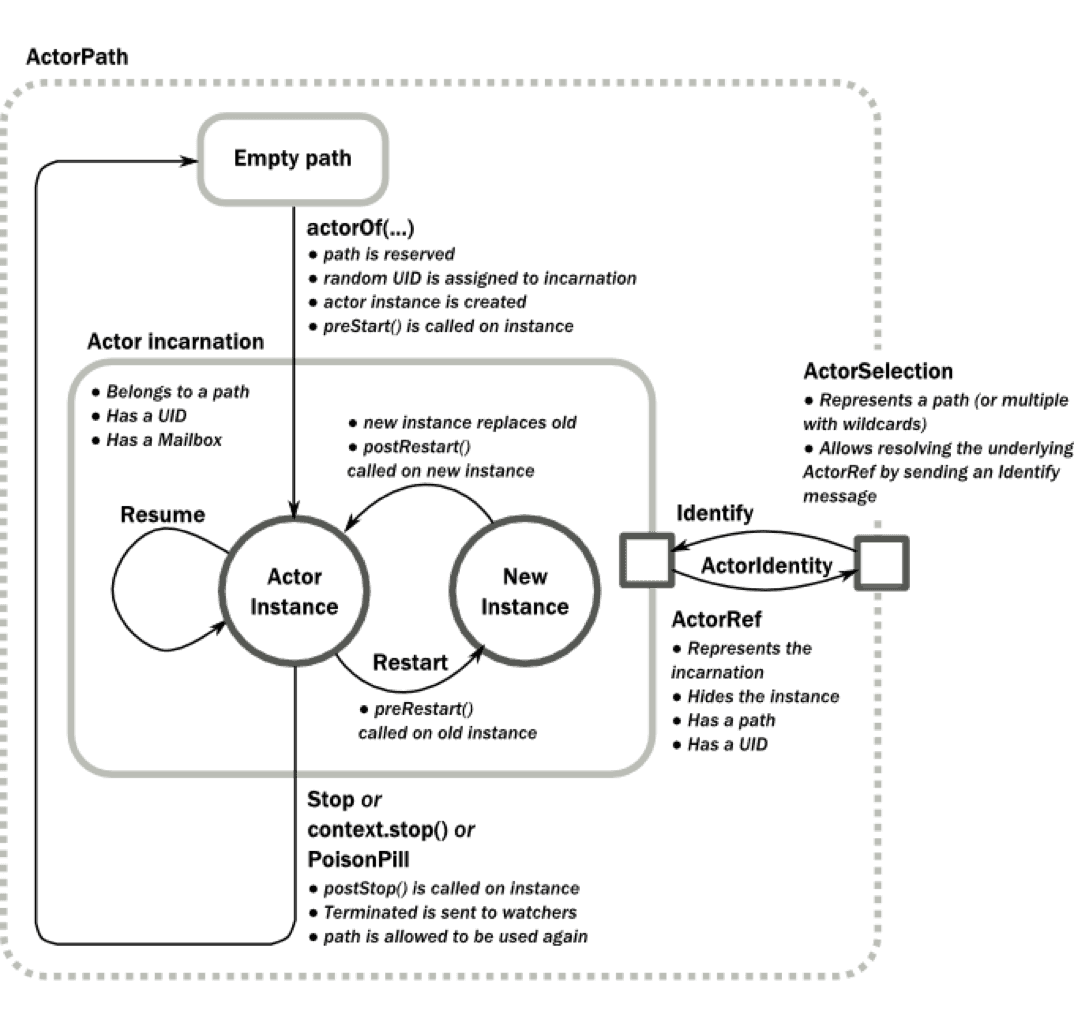 The actor model provides a number of constraints and conditions that make async robust, but more complicated.

Actors are definitely overkill for nearly all iOS applications, But properly implemented, Actors can be used to write fault-tolerant, highly performant distributed systems

Erlang proved the actor model was feasible and helped to popularize it. As Swift’s popularity outside iOS/macOS apps grows, I’m looking forward to seeing how the Actor Model gets used in Swift.

Some Async Abstractions are Impossible in Swift

Due to compiler limitations, there are some asynchronous approaches that are impossible to do in Swift, at least for now.

This abstraction is supported in JavaScript and C# and is very popular in those languages. Why? It lets you write code that looks “normal” but is actually asynchronous under the hood. It’s powerful and expressive and not yet possible in Swift for reasons we’ll discuss shortly.

Let’s look at an example.

Async/await isn’t perfect – for example, mixing async/await with regular callback closures is really hard to do. They’re an opinionated aspect of a programming language, and so they fit in well with opinionated languages like C# and modern JavaScript. Plus they work with throwing errors, so we could write idiomatic Swift error-handling.

Async/await is the way I wish Swift had done async programming, it’s probably the ideal but is now too late to standardize on.

Additionally, some asynchronous needs aren’t well-met by async/await. It would be hard to write gesture recognizer code this way, which works best with existing Swift-supported abstractions like FRP or target/action.

These are the strangest things I came across in researching different asynchronous programming approaches. Why? Because coroutines/generators violate some of the base assumptions I’d made about programming. Assumptions like:

Coroutines and generator functions aren’t typically used directly, but are required to make async/await. Swift doesn’t have support for coroutines yet, so that’s why Swift can’t have async/await like JavaScript or C#.

This fibGenerator function has been marked as a generator using the *, a syntax borrowed from JavaScript. It looks like an infinite loop, but it actually returns a value using the yield keyword and then pauses execution until it gets called again. Every time you call the function, it resumes execution, loops, and yields a new value. How cool is that?

This isn’t code you might actually use – JavaScript developers don’t often use generators directly, but rather use them to but higher level abstractions like async/await.

Hopefully you made this face a few times while reading. It’s always a good idea to learn new things, even if they’re not directly applicable to your job, just to know they’re out there. If you see something cool you’d like in Swift, head over to Swift Evolution and talk to the language community. Together, we can help shape the future of Swift.