CocoaPods is an open source library management tool for Objective-C (both iOS and OS X). This article is going to briefly take you through how to get started. This is meant t0 be a quick-fire demo – check out the Getting Started guide for more details.

A CocoaPod (singular) is a specification for a library, usually open source. CocoaPods (plural) is the tool for managing these specs.

First, you’ll need to install CocoaPods. That’s pretty easy since CocoaPods is a Ruby Gem, and all Macs ship with Ruby. Open a terminal and type the following (it’ll ask you for your password):

That’ll install CocoaPods on your machine.

Next, you’ll need an Xcode project that you want to integrate. Use cd to navigate to the working directory of your app.

Next, type the following command:

This command creates an empty Podfile for you. Open it in a text editor. It’ll look like the following.

Uncomment the second line to specify the platform (iOS) and the version (6). For your target (the first target), enter pod "SVProgressHUD", "0.9".

Save the file and return to the text editor. Enter the following command.

This will produce the following output.

Follow the last line’s instruction and close your Xcode project and open the Xcode Workspace file that’s been created for you. An Xcode workspace is like a folder for Xcode projects. Your Pods project contains all of the libraries (pods). 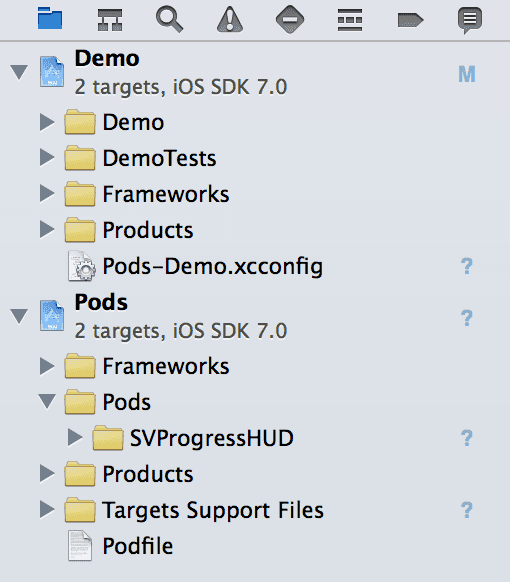 Now we need to import the SVProgressHUD.h header. Since it’s in another Xcode project, make sure to use angle brackets.

That’s it! We can now use our library. We’ve successfully integrated CocoaPods into our project. For each library you want to use, write pod "POD_NAME", "POD_VERSION" in your Podfile and re-run pod install.

There’s an Xcode plugin for CocoaPods if you’re not into the command line.

I gave a talk this morning on effectively using open source software. The slides are below.