I was thinking about the overall architecture of iOS apps the other day, and it struck me just how much Cocoa Touch enforces use of the Model-View-Controller paradigm. Not just encourages, but actively enforces. A good example is your application delegate; by the time your app finishes launching, it’s your app delegate’s responsibility to make sure that the window your app is in has a root view controller.

In iOS, a view controller is an object that controls a view hierarchy. Views are nested within one another to be rendered to the user, who can then interact with them. Those interactions represent changes the user wants to make to the data, stored in model objects. The view controller’s responsibility is to mediate the interaction between the models and the views (it does so via different mechanisms, of which Cocoa and Cocoa Touch provide a healthy variety of). In essence, that’s the MVC framework.

A view controller has a view property, which is the root of its view hierarchy. That view has subviews, which the controller can also reference directly. As a concrete example, let’s take a look at the built-in system stopwatch example: 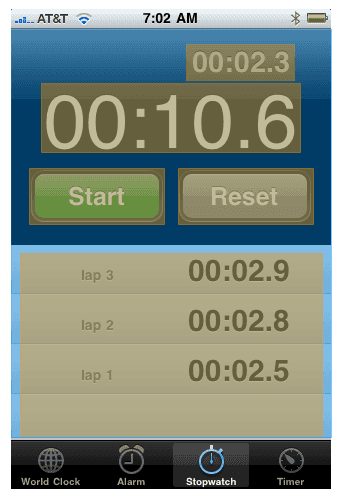 The controller’s view is everything on the screen, below the status bar at the top and above the tab bar at the bottom. However, the view controller also has references to the Start and Reset buttons, the labels indicating the lapsed time to the user, and the table view of the laps. 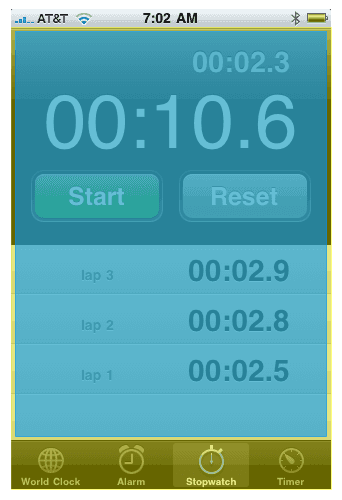 The blue stopwatch controller is a child of the yellow tab bar controller. 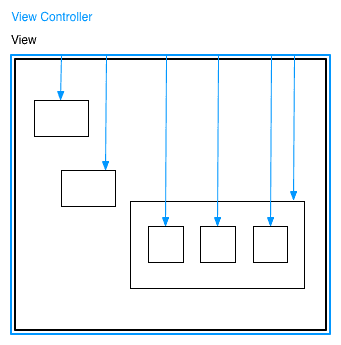 This is a pedagogical example, certainly, but the 500px app has some view controllers with references to dozens and dozens of subviews. It makes writing code with a clear separation of concern impossible and debugging that code stressfully difficult.

In iOS 5, we can delineate exactly which view controller is responsible for which views. Excellent! 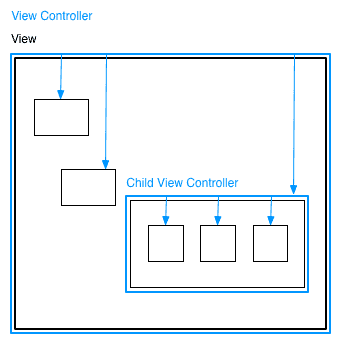 Nice! Notice that the parent view controller doesn’t even need a reference to the child view controller’s view; it can access it indirectly via self.subviewcontroller.view.

Now, there are some guidelines developers should abide by. These aren’t enforced, necessarily, but following some established standards will make your life easier.

Conversely, a child view controller shouldn’t reach out to its parent’s view hierarchy. The parent situates the position and size of its child controller’s view, and the child manages its own hierarchy from there.

(But that’s not the end of the story. When I write a self-righteous essay, I don’t stop short of a thousand words.)

A view’s position and size are determined by a C struct named CGRect, which contains two structs itself; a point representing the origin (top-left corner) of a view, and a size representing the width and height.

If you access self.view.frame in a view controller, you’re accessing the view’s position with respect to its parent’s coordinate system. That means that the values you retrieve (or, more dangerously, assign) will be subject to transformations applied by the parent view controller. This could include rotations and scaling, in which case, you’re fucked!

Well, the frame of a view is defined as the smallest bounding box of that view with respect to its parents coordinate system, including any transformations applied to that view. Let’s look at an example: 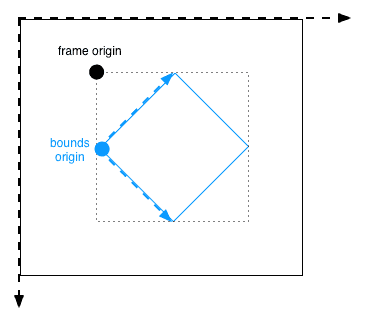 Here you can see that the bounds size and the frame size are completely different.

This means that relying on self.view.bounds.size will reliably get you the size of a view controller’s view. We’ll discuss origin in a moment.

If you were in the blue view controller above and tried to add a subview to your view hierarchy, and you used frame to have the view take up the entire screen, you’d end up with weird results.

Why is setting the subview’s frame to the bounds rect still not a good idea?

A transform on the view’s coordinate system will affect its origin. You’ll see this mostly with scroll views; scroll up by 10 points, and your bounds origin is now (0, -10). This not only affects scroll views, but also scroll view subclasses, the most famous of which is UITableView.

What’s that? iOS has a built-in view controller for table views? And you say if I rely on self.view.bounds as a rect that covers my entire visible view, that I’m doing it completely wrong?

So what’s the answer? How do you avoid this?

Objective-C developers often use self.view.frame or self.view.bounds to create a new subview that takes up the entire visible space. Instead of just copying these CGRect values over wholesale, create your own CGRects.

A little more typing, sure, but this is Objective-C. We don’t eschew verbosity. And it could literally save your life someday. (Editor’s note: implausible, but not impossible.)

This problem is not really all that bad, since you’ll mostly be OK. Mostly. And hey, we’ve all written code that’s not great. I just looked through the 500px codebase and I’ve found several occurrences of this, mostly to get my view’s size.

So the takeaway is, know what you’re doing. If you don’t know, learn. View hierarchies are a huge part of making amazing apps. Make sure that you completely understand views and their coordinate systems.