My wife and I have been enjoying re-watching our favourite episodes of Star Trek Voyager (we’re calling it “Voyager: Greatest Hits”). We really enjoy the story, characters, and of course the impressive leadership of Janeway (the best captain in the Star Trek cannon).

But as I was watching, something kind of hit me. Star Trek is totally propaganda for socialism. Allow me to explain.

First of all, don’t get me wrong: I kind of dig this. There are aspects of socialism that I like. There is room for nuance in how we organize our society and our economy – Canada and the UK both do well with socialized medicine, for instance. There is a vast spectrum of sociopolitical philosophies between free market libertarianism and Stalinist fascism. 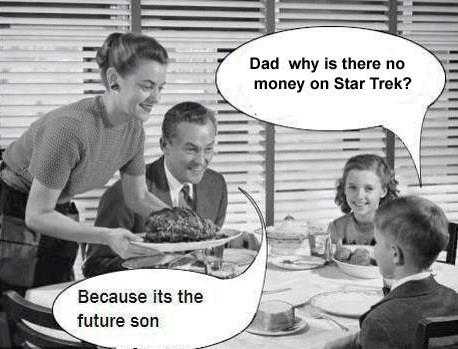 There is lots of evidence to show that Star Trek writers are using the show to package up socialist ideologies. The biggest sign is that the primary means through which people gain fulfillment is work. Characters on the show are depicted as productive members of a society first. Sure, they may be a parent or a painter or a poet, but those are all secondary. The only characters who don’t appear to have a career are often depicted as strange and eccentric.

You may argue that this is because the characters depicted in Star Trek are members of the military. That’s fair, but deriving satisfaction primarily through work is characteristic of almost every scientist, civilian, and otherwise “good” characters on the show.

Additionally, that military isn’t getting paid. There is no money in the future. Ish.

The economics of the future is somewhat different. You see, money doesn’t exist in the 24th century… The acquisition of wealth is no longer the driving force in our lives. We work to better ourselves and the rest of humanity.

We routinely see the characters in leadership roles exchange their health for the short-term benefit of the greater good. It’s practically a cliche that captains avoid routine physical checkups, ignore medical advice when injured, and disregard their sleep and nutritional needs. They dismiss their own needs because all that matters is the greater good.

In Star Trek, there appear to be no humans who practice religion. Faith is only depicted in less sophisticated, superstitious races. I don’t think the show has ever depicted a human wearing a headscarf or yarmulke, or hanging a crucifix or bowing in prayer. Humans faith is reserved only for the Federation.

But I have a purpose. My father taught me… from the time I was a little girl still clutching a blanket… that the United Federation of Planets is the most remarkable institution ever conceived. It is my cause to make sure that this extraordinary union is preserved.

What separates Star Trek from just being a depiction of socialist ideals and true propaganda is its clear agenda when presenting these ideals. We never see the consequences of a captain ignoring their health, for example.

There are some holes in this theory. For example, Marx really believed in the value of leisure. Then again, so did Adam Smith. Both thought the future would herald technology so humans didn’t need to work much at all. Star Trek depicts a world where technology’s primary use is helping humans do more work.

After a cursory search, I’m not the only one to have given this idea some thought. This examination is particularly detailed, but also rambling (the writer also pines for “the good ol’ days” when Star Trek was openly sexist, though).

I’m going to turn the idea over in my head. If you have ideas or suggested readings, hit me up on twitter.