I came across a study today that discussed politeness in the context of open source communities. Being a Canadian open source developer, I was naturally intrigued.

The study’s autors examined a tonne of tickets from big open source projects, like Hadoop and Casandra. Their data (and paper) are open source, so I took a look and the zip file is seven hundred megabytes.

Their goal was to discover if (and how) politeness of JIRA ticket comments is correlated with the following areas:

The answers to the first two questions were just as I expected: politeness is positively correlated with quickly-closed issues and with gaining/maintaining contributors.

The level of politeness does change over time, but not with any specific day of the week. The authors note that open source projects sometimes become neutral (or even impolite) for a time before returning to a polite norm. Interesting. 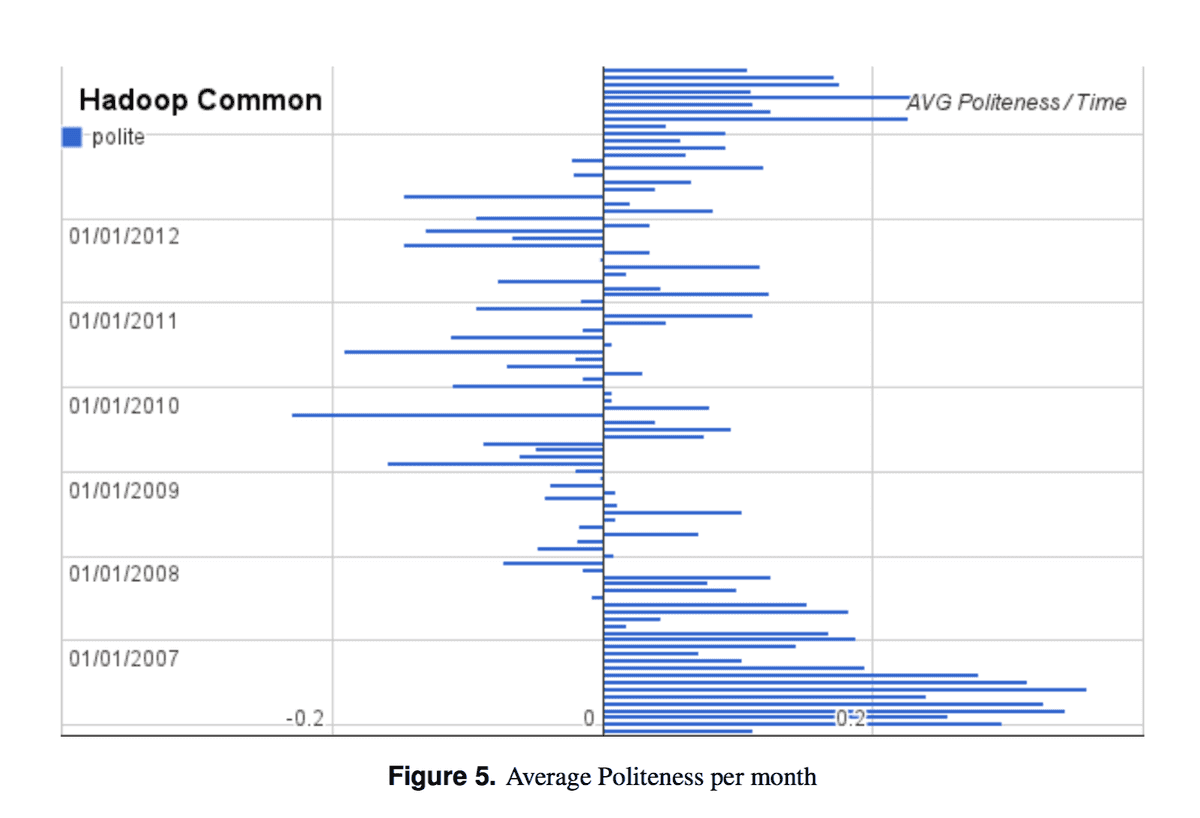 The most interesting bits, to me, are the last questions. How does average politeness vary with the type of issue? With its priority? 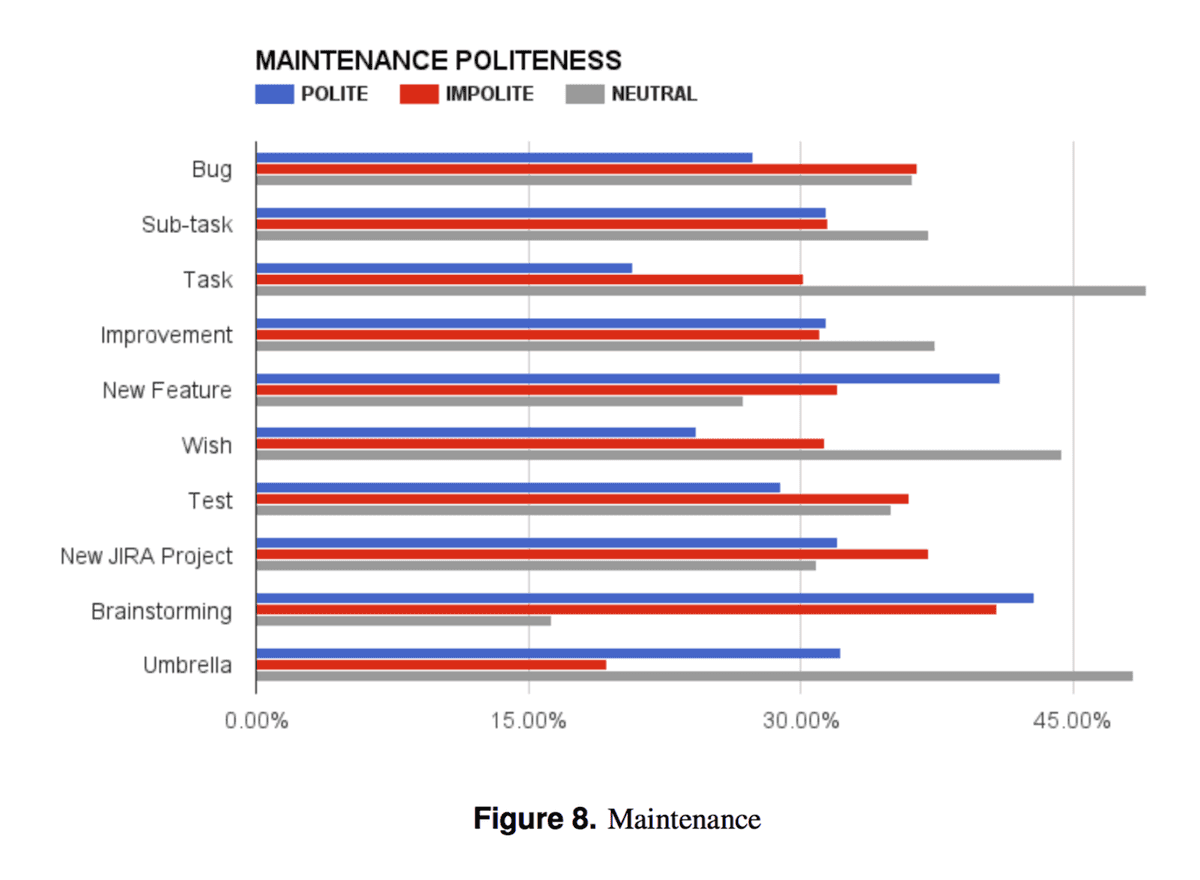 Lots of interesting bits here. The things that stick out to me are:

Very interesting! I wonder how the level of detail in discussion between tasks and subtasks influences the tone of the discussion? Are people more polite when asking for new features because they want something? Then why are wishes so impolite?

There are a lot of interesting questions you can ask about the data in this paper – but you don’t have to just consult the data. How does these observations jive with your own experiences? 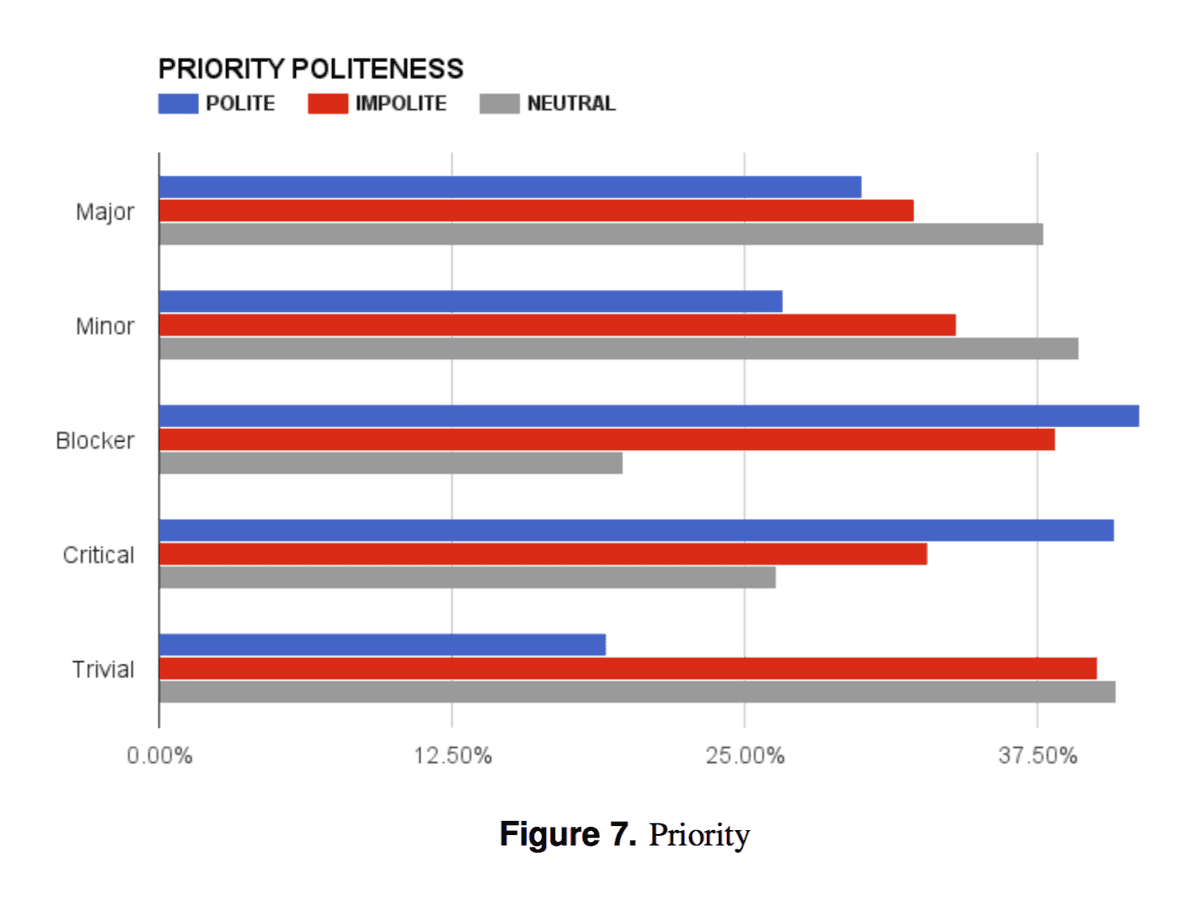 So major issues have about even politeness/impoliteness, but minor ones are skewed towards being impolite. Blockers are polarizing, critical issues seem to be way more polite, and trivial issues are super impolite.

By acknowledging the differences in politeness that are correlated with issues’ type and priority, we can act in a way to promite polite discussions. Our words can affect the tone of an entire conversation, even online.

I found an amazing Hacker News comment describing ways to be a delightful OSS contributor; a lot of their advice surrounds the problem areas outlined by the study.

Not just for the sake of being nice, but also because it’s correlated with quick issue turnaround and project health. It’s a win-win.