This morning, I was working on the sample app for Moya, a network abstraction framework that I’ve built on top of Alamofire. I needed a way to grab some user text input, so I turned to UIAlertView. Turns out that that’s deprecated in favour of UIAlertController. Hmm.

Looking around the internet, there weren’t very many examples of how to use this cool new class, and the documentation was sparse at best. Let’s take a look at the high-level API and then get into some of the nitty-gritty. (I’m going to write this in Swift because I am not a dinosaur.)

UIAlertController is a UIViewController subclass. This contrasts with UIAlertView, a UIView subclass. View controllers are (or at least, should be) the main unit of composition when writing iOS applications. It makes a lot of sense that Apple would replace alert views with alert view controllers. That’s cool.

Creating an alert view controller is pretty simple. Just use the initializer to create one and then present it to the user as you would present any other view controller.

Pretty straightforward. I’m using the .Alert preferred style, but you can use the .ActionSheet instead. I’m using this as a replacement for UIAlertView, so I’ll just discuss the alert style.

If you ran this code, you’d be presented with something like the following (on beta 7).

Weird. The title is there, but the message is not present. There are also no buttons, so you can’t dismiss the controller. It’s there until you relaunch your app. Sucky.

Turns out if you want buttons, you’ve got to explicitly add them to the controller before presenting it.

This is worlds better than UIAlertView, despite being much more verbose. First of all, you can have multiple cancel or destructive buttons. You also specify individual closures to be executed when a button is pressed instead of some shitty delegate callback telling you which button index was pressed. (If anyone out there makes a UIAlertController+Blocks category, I will find you, and I will kill you.)

If we added the above configuration to our code, we’d get the following.

Way better. Weird that the message is now showing up. Maybe it’s a bug, or maybe it’s intended behaviour. Apple, you so cray cray. Anyway, you should also notice that the “OK” and “Cancel” buttons have been styled and positioned according to iOS conventions. Neato.

What I needed, however, was user input. This was possible with UIAlertView, so it should be possible with UIAlertController, right? Well, kinda. There’s an encouraging instance method named addTextFieldWithConfigurationHandler(), but using it is not so straightforward. Let me show you what I mean.

Straightforward. Run the code, get the following. 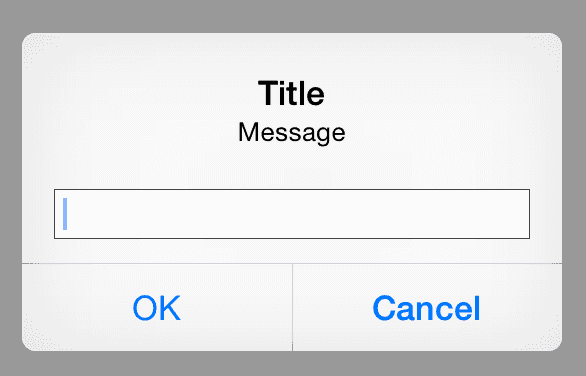 The question now is this: how do you, in the closure for the “OK” button, access the contents of the text field?

There is no way for you to directly access the text field from the closure invoked when a button is pressed. This StackOverflow question has two possible answers. You can access the textFields array on the controller (assuming that the order of that array is the same as the order which you added the text fields), but this causes a reference cycle (the alert action has a strong reference to the alert view controller, which has a strong reference to the alert action). This does cause a memory leak for each controller that you present.

The other answer suggests storing the text field that’s passed into the configuration closure in a property on the presenting controller, which can later be accessed. That’s a very Objective-C way of solving this problem.

So what do we do? Well, I’ve been writing Swift lately, and whenever I come across a problem like this, I think “if I had five years of Swift experience, what would I do?” My answer was the following.

I like this a lot. It avoids polluting our object with unnecessary properties, avoids memory leaks, and seems pretty “Swift”. I’ve created a GitHub repo that I’ll keep up to date with future betas, etc.

So yeah. The new UIAlertController has some great benefits:

As we march forward into this brave new world of Swift, we need to reevaluate our approaches to familiar problems. Just because a solution that worked well in Objective-C might work OK in Swift doesn’t make it a solution well suited for use in Swift. As developers, we should keep an open mind about new ideas and experiment. The way I look at it is like this: right now, the community is pretty new at Swift. We’re racing in all different directions because no one really knows what the best practices are, yet. We need this expansion in all directions, even if a lot of those directions are going to turn out to be bad ideas. If we don’t throw it all against the wall, we won’t figure out what sticks.

So next time you try and do something and get confused because Swift is unfamiliar, try all kinds of things. Could be you end up creating a brand new convention that’s adopted by the whole iOS community for years to come.