A few months ago, Yana Poteeva emailed me about a prospective speaking opportunity in Minsk, Belarus. I was already planning to visit Moscow a few weeks prior to the Minsk conference date, so this would be a second trip to a Russian-speaking country in as many weeks, but I thought it would still be really cool to visit Minsk. I had heard of the city, but knew almost nothing about it. And the whole reason I moved to Europe was to gain exposure to other cultures – Minsk sounded totally different from anything I had seen before.

Yana was looking for a non-technical topic that I could speak about based on my experience as a software developer – something that would appeal to other developers as well as business people at the conference. I had something in mind.

I honestly didn’t think about my expectations for Belarus or Minsk before arriving. Most of what I knew about it came from a Belarussian friend I have and John Roderick talking about his backpacking trip across Europe after the fall of the Soviet Union. Roderick’s description of stolen manhole covers seemed accurate as I passed through customs control – since the bathroom in the airport was missing its toilet seats. However, that was the only instance of a lack of infrastructure that wouldn’t feel at home in Canada (like the shared inadequacy of public transportation in Toronto and Minsk).

So I didn’t have too many expectations other than people would speak Russian. I knew that Belarus is a distinct country from Russia, but that was about it. Let the adventure begin.

The time leading up to the conference was very busy at work. Due to some details I won’t get into, there was a hard push to complete some features on a project in time for a new release. No problem – long hours come with the territory of working in a startup – the deadline was far from arbitrary, too. I felt like I could still be ready for my presentation in time, but then I got a bad cold on the day before my flight to Minsk.

OK, lots of cough drops and I’ll be fine – I’ll just push through and I’ll rest when I get home, I thought to myself. It was draining just thinking about it – I had just pushed through a lot of tasks at work and needed rest anyway and now I had a cold – but I didn’t want to let the organizers down.

The flight to Minsk was pretty great – no one beside or behind me on the plane. A baby sat in front of me, but they were very well-behaved and didn’t even recline their seat. I read my book, Everything is Bullshit, which I highly recommend. Before I knew it, we had landed. I still hadn’t finished my presentation. That’s OK, I thought, I’ll head right to the hotel and have it ready for tonight.

After suffering through the banalities of passport control, I was greeted by Yana. I stepped outside into the 5º weather and inhaled. It felt good – I could already tell my cold was going away and I actually do miss legitimately cold weather. (The Dutch have an apparent aversion to low temperatures; I already see many people in Amsterdam donning Canada Goose parkas in 12º weather. Minsk felt a lot like home at this time of year.) 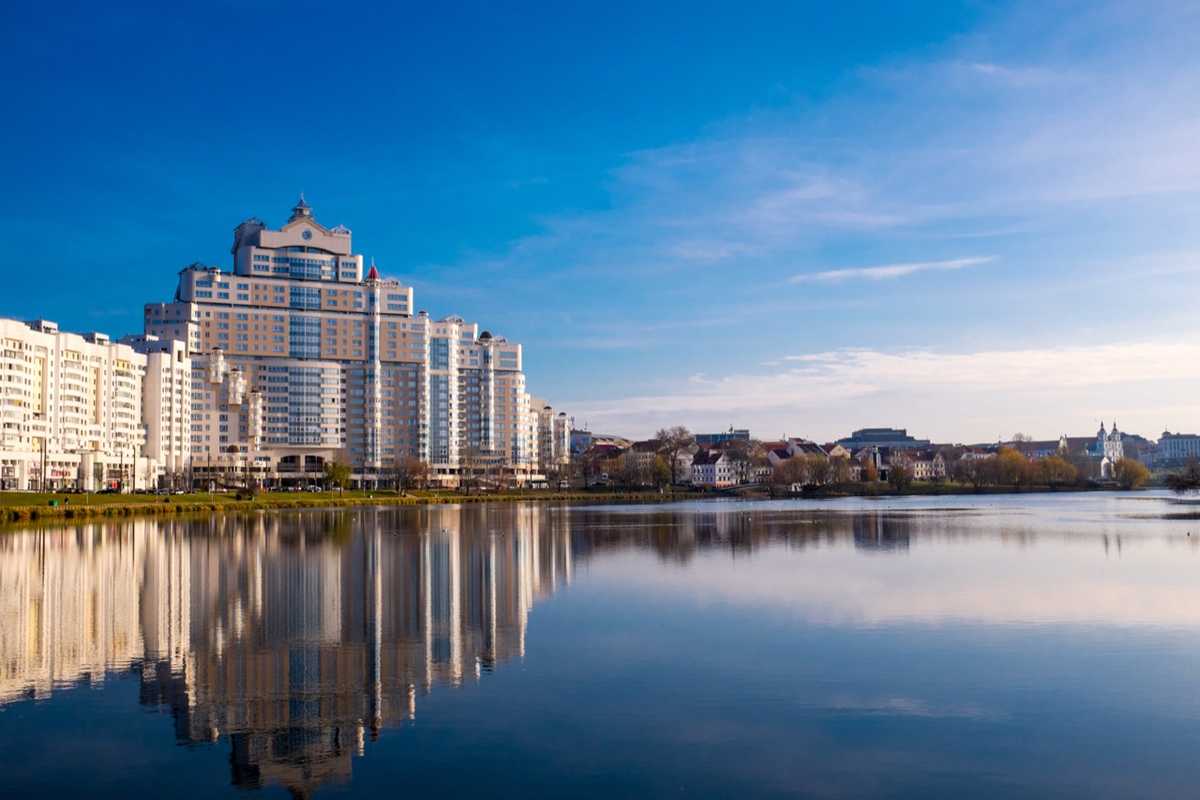 We walked out to the parking lot and a cool red convertible sports car stood out to me. Wow, I thought, obviously things have gotten better since John Roderick visited Eastern Europe. Then Yana opened the door to the car – it belonged to her. Awesome.

We drove into Minsk and she told me about the city, the country, and culture. We had to stop by the venue before continuing on to a party celebrating a startup’s acquisition (the tech scene in Belarus is actually pretty bustling – I was surprised to learn that Fitbit is based in Minsk). Yana runs Event Space, a place where conferences and meetups are hosted. It’s situated in a former Soviet factory next to a river and behind a university residence. Really neat space.

We went to the party and I stayed for some food and one drink – I had to employ some patently Canadian extreme politeness to turn down offers of more whisky – and returned to my room. Finally, I was able to prepare for my talk the next morning. It took me until 2am and I was only able to finish my slides in the hour before my presentation, the opening keynote of the conference.

Months prior to this, I had had an idea for a non-technical presentation about the value of teaching in the software development industry. Following my awesome experience working at Teehan+Lax, I knew that sharing knowledge through open source contributions, blog posts, and conference presentations was beneficial – both from my perspective as a software developer but also from the business side of things. T+L has an awesome culture – one of their key values is to “create more value than you capture”, a saying I still think about a lot.

But not even working for T+L could prepare for the radical attitude that Artsy has towards open source.

Combined, these two companies exemplify how business of different backgrounds can benefit from sharing their creations. This was the perfect topic for my presentation: engineers often see the value in open source contributions but are too shy to blog about what they learn; business often use open source software but don’t contribute their improvements or lessons learnt back to the community.

My whole career is punctuated by sharing knowledge and it has lead me to where I am today. I felt that I owed it to the world to let everyone know how sharing has lead me to some amazing opportunities and places.

The talk was, I believe, a success. I got some great questions afterward and was able to provide compelling answers. People spoke with me after the talk about their plans to reconsider their approach to sharing at work.

In a video interview for the startup community in Kiev, I was asked about the context of my talk. I was, after all, encouraging citizens of a post-Soviet country to give away their work to the community for free. This actually highlighted a challenge that I had when I was preparing my talk (the first step of preparing a presentation, for me, is a deep analysis of my audience). I suspected that the interviewer was fishing for me to repeat a key point of my talk, so I obliged:

Preparing this talk was difficult because I am unfamiliar with the culture in this post-Soviet region of the world. However, the points that I made in my presentation are applicable to any business in the software world. Sharing what you learn in the form of open source code and blog posts doesn’t have to be about doing what’s best for others; it can be about what’s best for you and your business – helping others can just be a happy side-effect. In my home region in Canada, we say that “rising tides lift all boats.”

On that day, it happened to be Revolution Day, the anniversary of the 1917 October Revolution – still a national holiday in Belarus. As I couldn’t understand the other conference speakers, who presented in Russian, I spent the remainder of my day reading Wikipedia articles about the history of Russia, Belarus, and the Soviet Union.

The next day, there was a hackathon scheduled. Instead of participating, I was given a fantastic tour of the city by Yana. Minsk is a pretty big place – about two million people – and the streets are very wide. It’s a car-friendly city but, unlike Moscow, it didn’t seem to have a traffic problem at all. 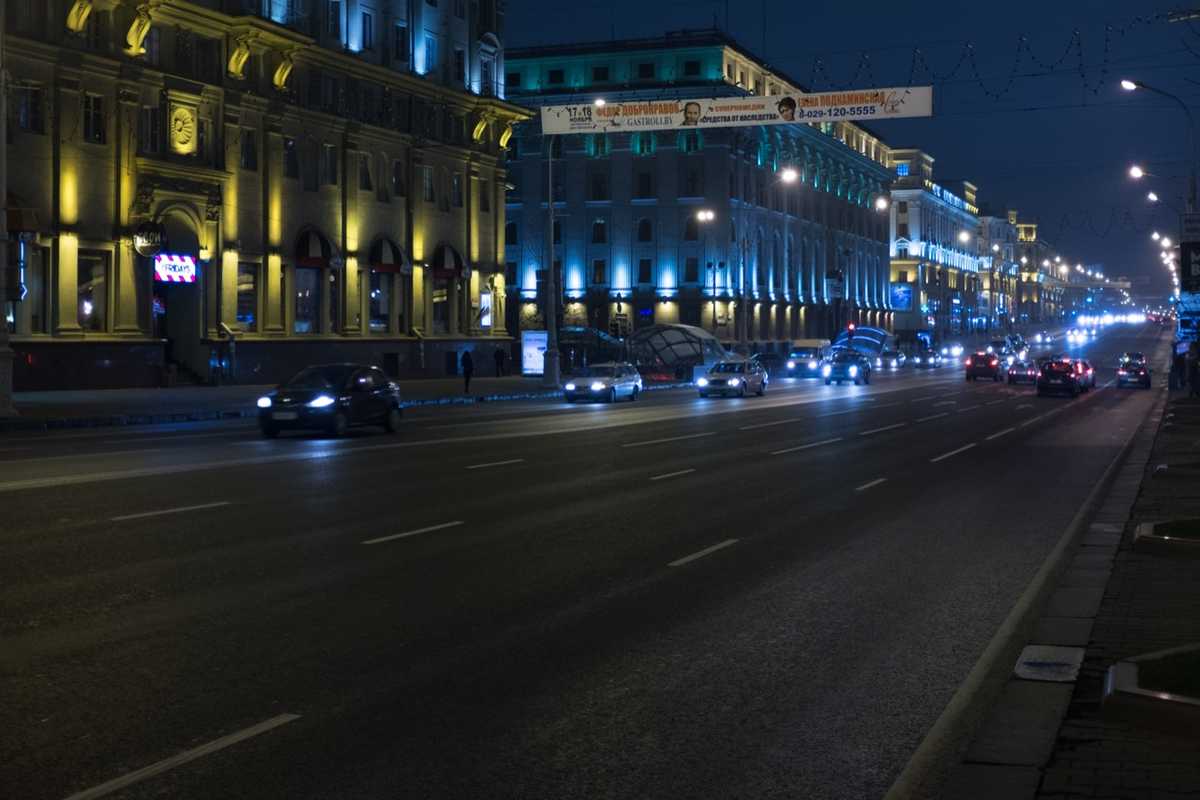 Since Minsk was mostly destroyed in the second World War, all of the buildings were relatively new – many were built during the Soviet era. In fact, Minsk was a focal point of the post-war industrialization in the Soviet Union. Consequently, it is used as the set of many films that portray Soviet Russia. I even saw a film crew and some seriously Soviet-looking cars. 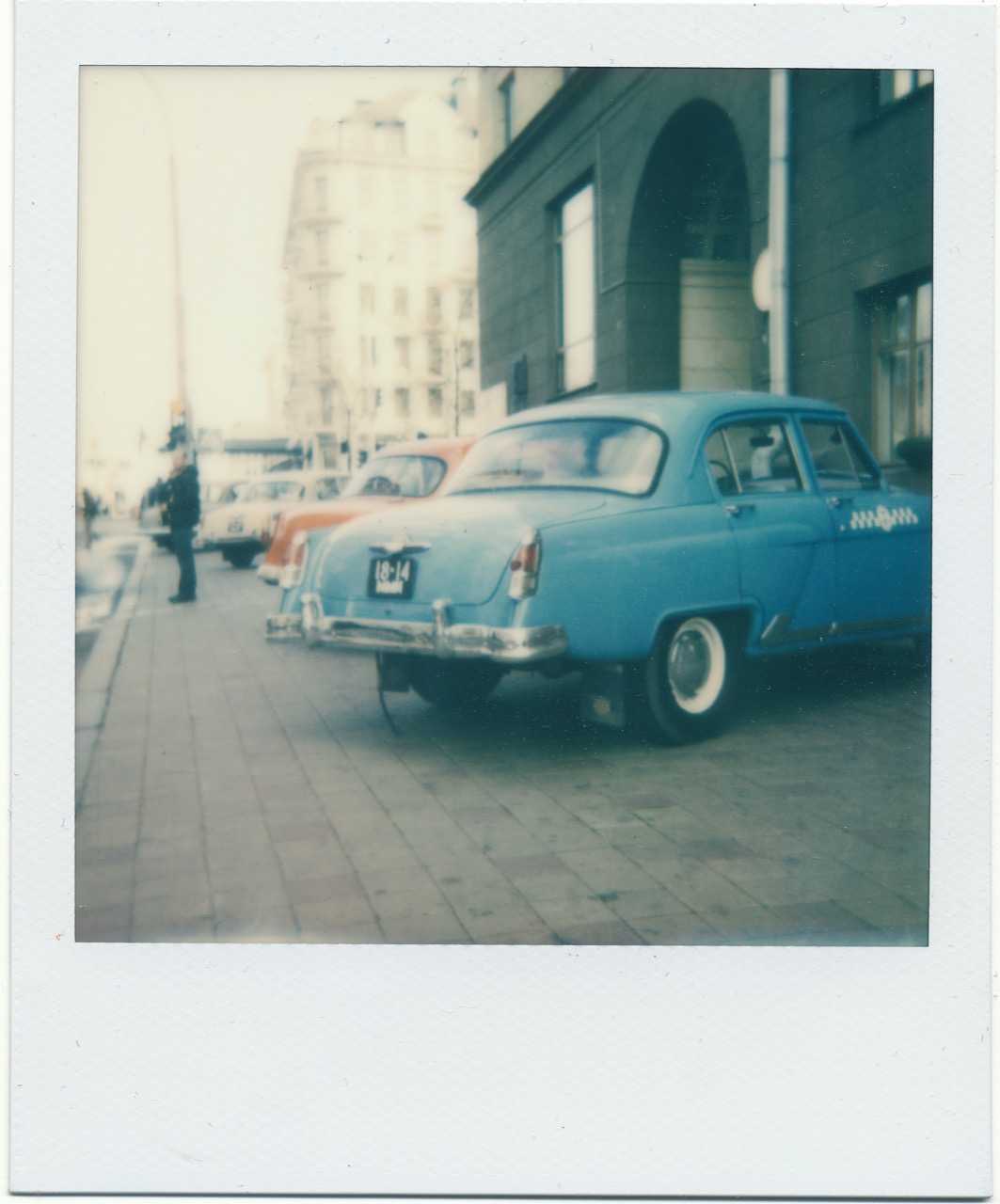 A river runs through Minsk and I got to see many different parts of the city touching this body of water. The most spectacular view, however, came from on top of the national library. This twenty two-story, polyhedron-shaped building has an observation deck. I was lucky enough to get a 360º view of the city during a sunset with moderately clear skies. Really cool.

As recently as a few years ago, most people in Minsk exclusively drank tea. Coffee has only recently come onto the scene. On Sunday morning, I attended “Coffee and Code” that Yana’s husband Cyril organizes. This idea, inspired by Appsterdam’s Peer Lab, is where developers meet each other at a café to work on problems, helping each other if they can and having some great coffee.

It’s something I’m looking forward to organizing once I move to New York.

Sunday afternoon, I attended the Belarus State Circus. Admittedly, this was a bit odd since the circus is meant for children, but I had never seen anything like it and seeing what Belarussian children see for entertainment would help give me some perspective into the Belarus culture. 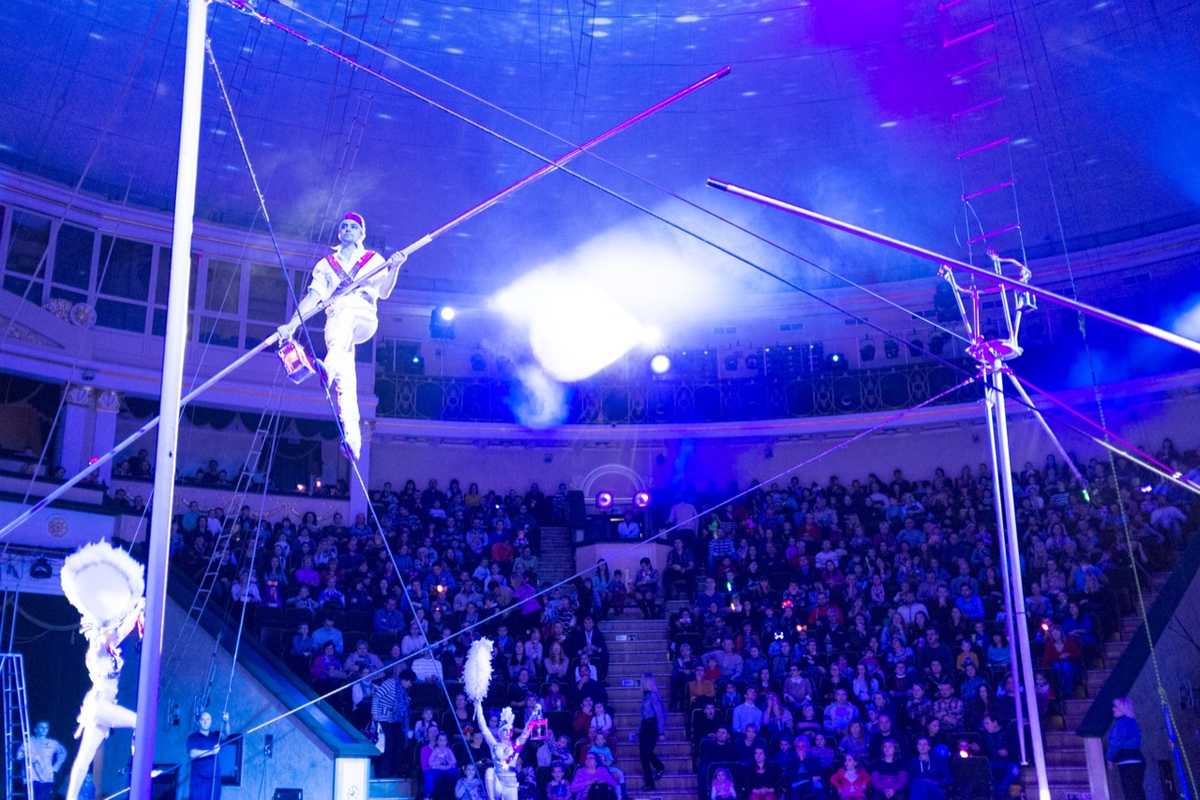 It was amazing. One act, a very short man and a very tall man ballet-fighting whilst both wearing swimming flippers was like a marriage of Monty Python and Zoolander. Another demonstrated some fantastic feats of strength and coordination. I had never seen these kinds of acrobatics and choreography, even if some of the comedy routines were lost on me due to my Russian illiteracy. With front-row seats, I was also able to see some of the people behind the curtains – the circus is a heavily designed experience. I was fascinated.

The next morning, I had a great sandwich on traditional black bread. I quickly packed my bags and rushed downstairs to the taxi waiting to take me to the airport. As much as I had enjoyed my time in Minsk, I was eager to get home and rest for the remainder of the day. I was had nearly recovered from my cold despite my decidedly counterproductive lack of rest over the preceding week. I left Belarus with a broader perspective on the world, some great stories and photos, and plenty of new friends. Exhausted, I fell asleep on the plane while reading a new book, The \$12 Million Stuffed Shark. After taking the train into Amsterdam, I slept. I had earned it.