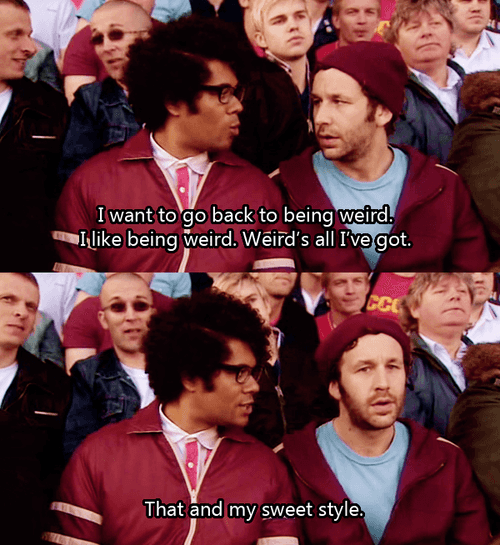 A sweet style is something I’ve been trying to attain for about two years. I just kind of decided one day that I cared about how I look, since it not only affects how other people see me, but also affects how I see myself.

I started my new job 6 weeks ago. Other devs started on the same day, and came dressed with a shirt and tie, dress pants, and formal shoes. Over the next month, they slowly shifted to jeans, t-shirts, and sneakers.

There’s nothing wrong with this at all - I think the most important thing about your style is that you’re comfortable in it. However, being someone who wants to have a sweet style in my work sometimes puts me out of place.

A common conversation I have with salespeople is something likech:

Salesperson: “So you’re looking around at our sales racks. What do you do for a living?”

I think they’re used to people who come in who have to  dress up, where I choose to. Most days, anyways. This week was particularly hard on me, so I tended to wake up late and throw on whatever I could.

This highlights why I consider myself pretty lucky to be in the field I’m in. I can choose one day to wear chucks and jeans and the next day choose to wear some slick chinos, a nice plaid shirt, knit purple tie, and sweet shoes. The option to dress up is really nice.

I think my aversion to the standard dev style of t-shirt and shorts is grounded in not only standing out (maybe local companies will come to know the legend of “Ash Furrow, Toronto’s Best-Dressed Developer”), but also grounded in the fact that I’m a bigger guy. Computer nerds are stereotyped as chunky slobs, and I think there are a lot of us who try to dispel this in their own ways. I have nerd friends who are into skateboarding, or hip-hop, or cycling, or who also dress more than the bare minimum. I’m not saying we’re trying to break away from the stereotype, but I also notice these nerd friends who do break the stereotype are also exactly* the ones who are uncomfortable with it. (*this is mathematically precise, which I know they’ll all appreciate.)

Now that I’m out fo school, I can afford nicer apparel to build my sweet developer style, but have to be careful not to go overboard. Ashley has helped me develop a sort of litmus test for determining if I should buy something. Maybe I’ll detail it next time.